The immediate aftermath of the Ethiopian Airlines’ Boeing 737 MAX crash is stunning. While it is not unprecedented for the aviation authorities and airlines of non-US countries to diverge from FAA on when an aircraft grounding is necessary, it is unusual. And the scale of this divergence is unprecedented.

In less than 60 hours of flight 302’s crash in Addis Ababa on Sunday, the MAX had been grounded pretty much any place where it is operated. By Tuesday evening, Austria, France, Germany, Ireland and the UK were among European countries that had already stopped MAX flights. They are notable because they did so even though EASA had not issued a grounding by that time. Then came the incredible announcement from EASA that it was issuing an immediate order to ground all MAXs, suspending operation of any aircraft into or within European Union countries.

By then, Australia, Brazil, China, India, Indonesia, Malaysia and Singapore had already grounded the new narrowbody, while several individual airlines that operate the MAX had pulled the aircraft from their schedules.

FAA and Boeing remained firm on Tuesday that there was no data or information from the Ethiopian crash to link whatever caused the October crash of a Lion Air MAX 8, or to indicate the aircraft is unsafe. And the US airlines with MAXs in their fleets continued to fly them.

Almost everyone outside the US, however, took a “better safe than sorry” approach. Media and customer concerns were likely major factors in those decisions. For most airlines and countries, with few MAXs in service, rescheduling and cancellation disruptions are minimal. But when you have media widely publicizing which airlines operate the MAX and on which routes—the BBC even posted the specific MAX flights that Norwegian UK and TUI had scheduled for Tuesday—then the emotional pressure becomes huge. If airlines are taking calls from customers wanting to check which aircraft they are flying on, or to change their flight if it’s a MAX, or even worse, making a new booking based on which airline does not operate the MAX, then the ‘safe, not sorry approach’ is understandable.

But is it right?

From everything that was known about flight 302 by late Tuesday—and that was not a great deal—FAA was correct in saying there was no evidence to support a grounding. Indeed, EASA in its grounding statement acknowledged its action was a precautionary one and that “it is too early to draw any conclusions as to the cause of the accident.”

Let’s be clear. It’s almost certain that not one of the countries, regulatory authorities or airlines that have grounded the MAX since Sunday has any more information about that crash or the MAX than FAA. They have made the grounding call based on “concerns” and “similarities”. And the public is fueling those emotional concerns via the relatively new information source at its disposal after most airline crashes—flight radar tracks. “Experts” are quickly touting these as evidence of what went wrong and how; they are nothing of the sort.

However, the MAX story is running away from FAA and, for that matter, Boeing and US airline operators. US President Trump began tweeting on the issue, saying new aircraft were too complicated and presented a “danger”. Several big-name US senators have already called on FAA to take action and some are calling for congressional hearings. US flight attendant unions are also calling on FAA and their airline leaders to take action. You have to believe that the US airline customer service lines are filling with a whole lot of questions that start with, “will I be flying on a MAX?” By Tuesday afternoon, US petition organizations were issuing thousands of emails inviting people to sign a petition calling on US airlines to ground their MAXs.

Any aviation regulatory authority should take immediate and appropriate action where a serious safety risk is identified. FAA and DOT have reiterated that in the case of the MAX, they will do exactly that, but they won’t make such a call without evidence. So here’s the bind for them, and for that matter the US airlines; they are now in a no-win situation.

If anything emerges from the early investigation of the Ethiopian crash that implies a potential link to the Indonesian crash and/or the much-talked about MAX MCAS stall-prevention system, and FAA then issues a grounding, it will be slammed for not taking such action earlier.

If, however, early data enables investigators to at least rule out any connections, then all those who grounded the MAX can put it back into service with likely no public backlash. People will simply say, “my country/my regulatory authority/my airline took the safest course.”

Which isn’t true based on known facts, but it’s emotionally persuasive in an internet- and social media-connected world.

No aircraft manufacturer, airline or regulatory authority, wherever it is based, makes safety anything less than a top priority. But the MAX crash investigations, whatever their outcomes, appear to indicate new and diverging definitions between the US and the rest of the world on what is required to make a safety call.

A Milén si va a Linate per i nazionali, a Bergamo per gli internazionali e a Malpensa per gli intercontinentali e i charter
Top

In Consultation with the FAA, NTSB and its Customers, Boeing Supports Action to Temporarily Ground 737 MAX Operations

March 13, 2019 – Boeing continues to have full confidence in the safety of the 737 MAX. However, after consultation with the U.S. Federal Aviation Administration (FAA), the U.S. National Transportation Safety Board (NTSB), and aviation authorities and its customers around the world, Boeing has determined -- out of an abundance of caution and in order to reassure the flying public of the aircraft’s safety -- to recommend to the FAA the temporary suspension of operations of the entire global fleet of 371 737 MAX aircraft.

“On behalf of the entire Boeing team, we extend our deepest sympathies to the families and loved ones of those who have lost their lives in these two tragic accidents,” said Dennis Muilenburg, president, CEO, Chairman of The Boeing Company.

“We are supporting this proactive step out of an abundance of caution. Safety is a core value at Boeing for as long as we have been building airplanes; and it always will be. There is no greater priority for our company and our industry. We are doing everything we can to understand the cause of the accidents in partnership with the investigators, deploy safety enhancements and help ensure this does not happen again.”

Boeing makes this recommendation and supports the decision by the FAA. 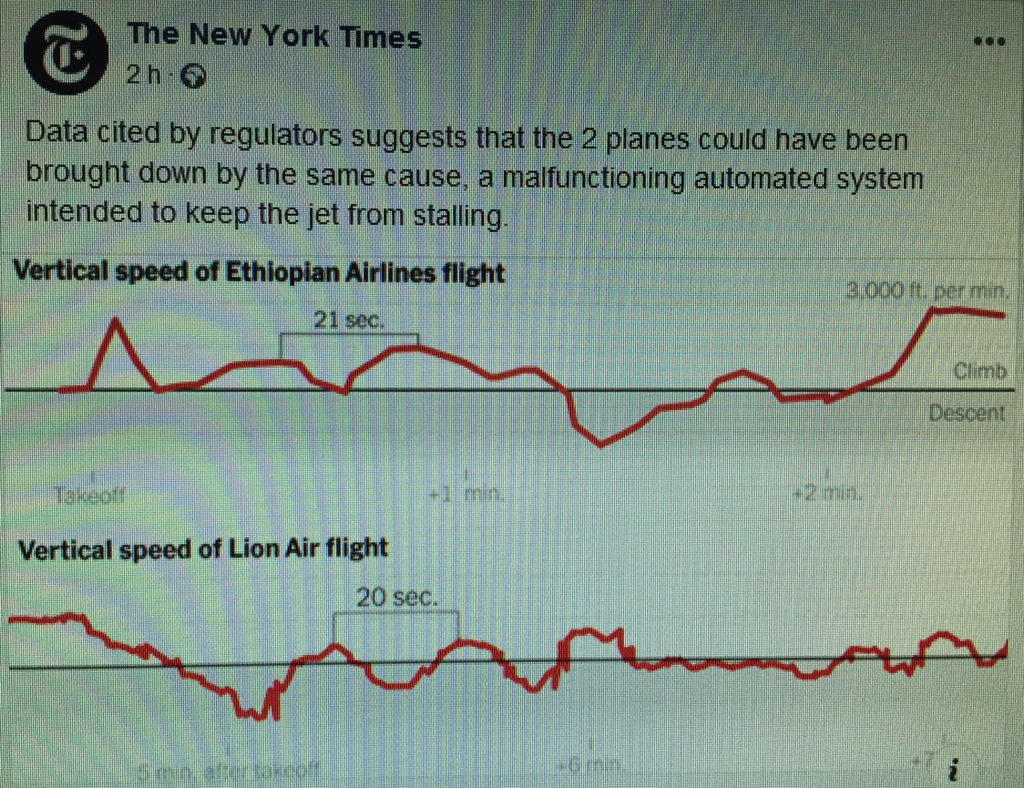 American and Canadian regulators cited newly available satellite-tracking data in grounding all Boeing 737 Max jets on Wednesday, saying there were similarities between the deadly crash involving the plane in Ethiopia on Sunday and a Indonesian flight in October.

The causes of both crashes are still under investigation. But the data cited by regulators points to preliminary indications that the two planes could have been brought down by the same cause, a malfunctioning automated system intended to keep the jet from stalling.

Marc Garneau, Canada’s transport minister, said on Wednesday that the satellite-tracking data revealed “vertical variations” in the Ethiopian Airlines flight reminiscent of those seen before the crash of the Lion Air Boeing 737 Max in Indonesia in October.

The investigation of the Ethiopian crash is still in its early stages, and the full data cited by the authorities has not been publicly released. Many experts cautioned that any conclusions are far from certain and don’t rule out other possibilities, such as pilot error or another malfunctioning system.

But aviation experts who reviewed the patterns in publicly available data said it suggests that the newly installed automated system known as M.C.A.S. may have been activated on the Ethiopian flight and could have contributed to the crash.

Many experts believe that during the first crash, the Indonesian pilots lost their battle with M.C.A.S.

Possibly because of faulty sensor readings, the automated system pushed the nose of the Lion Air plane down. The pilots repeatedly counteracted it and pulled the nose back up, only to be overridden by the system again. Each interval took about 15 to 20 seconds, leaving a repetitive signature on the data for the plane’s vertical speed.

That led to the series of variations of altitude until the pilots crashed.

The public data for the Ethiopian flight is less clear and complete, but it appears to show a similar signature — an interval where the plane was gaining altitude and then leveling out.


The Canadian transport minister said that based on satellite data he had reviewed, M.C.A.S. may have played a role.

The oscillation of roughly 15 to 20 seconds is a telltale sign that suggests the M.C.A.S. system may have been involved, said R. John Hansman Jr., a professor of aeronautics and astronautics at the Massachusetts Institute of Technology.

Planes like the Boeing 737 oscillate naturally, he said, because of turbulence and and other effects. But those swings have different time spans: either between five and eight seconds, or a minute or longer. The variations in the intermediate range of 15 or so seconds have no other obvious explanation, he said.

“Even from the available data, there are similarities between the Lion Air case and this case in terms of this 15 second periodicity. That would point toward a similar phenomenon. We’ll know more when we get the flight data recorder,” Professor Hansman said.

Don Thoma, the chief executive of Aireon, the company that provided the new data, said that it “certainly showed something was wrong with the aircraft, and something they should take a hard look at.”