“FY16 was a year in which we delivered significant traffic and profit growth in all 4 quarters (despite an ave. oil price of $90bbl as a consequence of hedges put in place in 2014) as our AGB service programme is attracting millions of new customers to our lowest fare/lowest cost model. Highlights of the past year include:

- First airline to carry over 100m intl. customers in a calendar year

Delivery of 41 new B737 aircraft last year facilitated the expansion of our low fare/low cost services into more primary airports and routes. We launched 7 new bases in Belfast, Berlin, Corfu, Gothenburg, Ibiza, Milan (Malpensa) and Santiago over the last 12 months. We opened more than 100 new routes as we became the first airline ever to carry over 100m international customers in a calendar year.

This year we take delivery of 52 new B737 aircraft which will grow our fleet to 380 (net of handbacks) by year end. We have announced 7 more bases (Bucharest, Hamburg, Nuremberg, Prague, Sofia, Timisoara and Vilnius) as part of our winter FY17 schedule.

The success of Ryanair’s AGB programme is reflected in our record traffic and load factors. Over the past 2 years we have seen load factors improve from 83% to 93% as our traffic has grown from 80m to over 106m p.a. We improved schedules and customer choice as we grew in more primary airports. We’ve enhanced the in-flight experience with slim line seats, more leg room and Boeing Sky Interiors on our new aircraft, and our cabin crew helped design and deliver new uniforms.

Ryanair Labs launched our new, dynamic website and mobile app in Oct. These improved digital platforms have performed well with a rapid take up by our customers.

While AGB Years 1 & 2 were about fixing things that our customers disliked and improving our offering, Year 3 will be about digital acceleration and innovation, particularly through Ryanair Labs. This year’s initiatives will include a new Leisure Plus service, improved Business Plus, a “One-Flick” payment facility on our mobile app, auto check-in for “My Ryanair” customers and lower checked bag fees.

We again call on the European Commission to take action to prevent the skies over Europe being closed this summer due to unjustified strikes by ATC unions. The European courts should also reverse previous unjust rulings that EU airlines should compensate passengers during ATC strikes when airlines have no control over these and cannot under law recover costs from protected ATC unions.

Fuel and US$ Hedging:

FY16 fuel was hedged at approx. $90bbl. FY17 is 95% hedged at approx. $62bbl and €/$ is hedged at $1.18 which will deliver fuel savings of circa €200m (as price savings are offset by increased flight hours). We are now 44% hedged for FY18 at approx. $50bbl. We plan to pass on most if not all of these fuel savings to our customers in lower air fares particularly as we grow capacity over the next 12 months in key markets around Europe.

Unit costs remain an obsessive area of focus for Ryanair, which is why we delivered an industry leading cost performance in FY16 as unit costs fell 6%, despite our continued expansion into more primary airports, the adverse impact of €/£ exchange rate movements and AGB improvements. Ex-fuel unit costs were down an impressive 2% for the full year.

It is notable that in the 2 years since we launched AGB, we have delivered ex-fuel unit costs reductions of over 2%. We expect the significant unit cost gap that exists between us and all other EU competitors to widen further over the coming years as we benefit from lower cost aircraft, fuel savings, growth discount airport deals, lower cost financing and long term pay & productivity deals with all our pilots and cabin crew.

Q4 yields on close-in Easter bookings were adversely impacted by over 500 flight cancellations following the Brussels terrorist attacks and repeated (mainly French) ATC strikes. In recent weeks Italian, Greek, Belgian and French ATC unions have also engaged in unjustified strikes which caused a further 200 plus cancellations. Q1 yields will be negatively impacted by these cancellations, lower fares (as competitor high cost fuel hedges unwind), the absence of Easter in April and Sterling weakness in the run up to the Brexit referendum on June 23.

Ancillary Revenue continues to track ahead of our long term target of 20% of revenue. Following the launch of our personalised website in Q3 last Oct., we are working hard to improve cross selling of all ancillary products/services and targeting an increased spend per customer in FY17.

In Feb. we announced our 4th (€800m) share buyback programme. We are now over 80% through this programme and expect to complete it by the end of Sept. This is in addition to the €398m special distribution last Nov. and the €400m share buyback completed in Aug. 2015. Following this latest buyback, we will have returned over €4bn to shareholders in just 8 years since 2008.

Our balance sheet remains one of the strongest in the industry. We had net cash of €312m at Mar. 2016 following CapEx of €1.2bn, debt repayments of €385m and shareholder payments of over €1.1bn during FY16.

We see growth opportunities for Ryanair’s lower fares and AGB programme. We are, on average, 2% better booked for the peak summer months than this time last year but at lower fares. We expect our FY17 load factor will be similar to last year (93%) as we grow traffic by 9% to 116m. Pricing however will be softer, particularly in Q1 & Q4 neither of which have any Easter holiday benefits and capacity additions in Europe are higher than in previous years as hedged competitors enjoy falling oil bills. Since we continue to be load active/yield passive we expect (with very limited visibility) ave. fares to fall approx. 7% this year (comprising H1 -5% to -7% & H2 -10% to -12%).

Our cost discipline should see us deliver ex-fuel unit cost reductions of 1% in FY17. Our fuel bill will fall by some €200m as lower euro pricing is partially offset by bigger volumes due to growth.

Accordingly, we cautiously expect full year net profit to rise modestly, by approx. 13%, to a range of €1,375m to €1,425m. This guidance remains heavily dependent on the strength of close-in summer bookings and next winter’s yields, the strength of Sterling and the absence of any further external shocks or significant ATC strikes/cancellations.”

As the UK’s largest airline, Ryanair strongly believes that the UK economy and its future growth prospects are stronger if it remains a member of the European Union (“EU”). One of Europe’s great success stories was airline deregulation in the late 1980s which allowed Ryanair to break up the high fare cartel of Europe’s flag carrier airlines, and has enabled us to transform air travel, tourism, economic growth and jobs all over Europe. Ryanair is actively campaigning for a “Remain” vote in the referendum on June 23 next.

If the UK leaves the EU then this, we believe, will damage economic growth and consumer confidence in the UK for the next 2 to 3 years as they begin to negotiate their exit from the EU and re-entry to the single market in very uncertain market conditions. 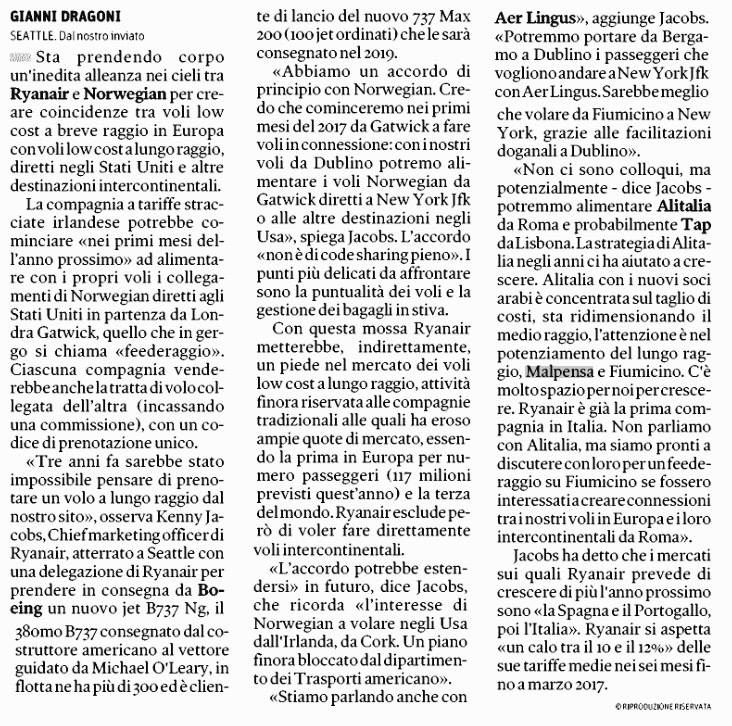