Gulf Air, the national carrier of the Kingdom of Bahrain, announced today that will start services to two key European cities, Milan in Italy and Geneva in Switzerland during March 2011.
Service to Milan will begin on Sunday 27 March with four weekly services while flights to Geneva will start on Tuesday 29 March with three flights a week.
Announcing the new route launches at a press conference today, Gulf Air CEO Samer Majali said, “The launching of these two new routes further demonstrates our commitment to connect Bahrain to the region and the rest of the world including some of the world’s leading financial markets, to support Bahrain’s financial services and trade sector. This was a key component of our new strategy that we announced in November 2009 to make Gulf Air a commercially sustainable and successful business, while supporting the nation’s Vision 2030.”

Mr. Majali continued, “By launching services to the cities of Milan and Geneva we are not only opening new doors of trade and tourism opportunities these two cities offer to the people and businesses of Bahrain and the region but also bringing new commercial and other opportunities to Bahrain, the gateway of the Arabian Gulf and beyond.”

“Milan is one of the EU’s and the world’s major financial and business centers boasting Europe’s fourth highest GDP. From finance to fashion, from designer automobiles to discerning music, from architecture to art, the city of Milan is undeniably one of the most popular destinations in Europe attracting millions of visitors every year.”
“Geneva, the second largest in Switzerland, is the most international city in Europe with over 40% of its population coming from outside the country. One of the top ten richest cities in the world by purchasing power, the city’s superb location at the foothills of the Alps Geneva’s fabulous climate, its sprawling and sparkling lake and, beautiful parks and gardens, has made it one of the most-sought-after summer retreat for GCC Nationals. Besides tourism, Geneva is also home to over 150 international governmental and non-governmental organisations, including the Office of the United Nations and nearly 200 multinational corporations that presents itself a huge opportunity for business travel.”

“We are glad to have chosen to add these two key cities to our network allowing us offer our passengers more choice,” Mar. Majali concluded. 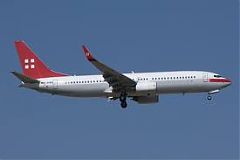 Both Geneva and Milan will be served by a Boeing 737-700 aircraft, wet-leased by Gulf Air from Privatair a leading international business aviation group with over 30 years in business with headquarters in Geneva, Switzerland. Gulf Air has recently signed an agreement with Privatair to this effect.

Visita in piazzale a Malpensa