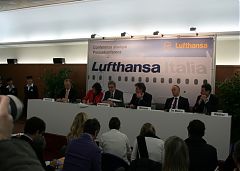 Frankfurt / Milan, 23 May 2011 – Lufthansa is reshaping its presence in the Italian market in order to focus on its strong position there. To that end, Lufthansa’s current alignment in Italy with its core brand Lufthansa, Lufthansa Italia and the regional airline Air Dolomiti will be streamlined.

The Lufthansa Italia brand, which was launched in 2008, will only be retained until the end of the summer timetable on 29 October 2011. The Airbus A319 aircraft currently operated by Lufthansa Italia will be deployed elsewhere within the Lufthansa Group from the start of the 2011/2012 winter timetable. At the same time, Lufthansa foresees double-digit growth in its offering to Italy, which it already serves frequently from its Frankfurt and Munich hubs. Air Dolomiti will also increase flight frequencies to Germany in its route network, which focuses on connecting the major economic centres in Northern Italy with Lufthansa’s Munich base. Together, Lufthansa and Air Dolomiti currently serve 19 destinations in Italy.

Lufthansa CEO and Chairman Christoph Franz: “Bundling our services under the Lufthansa and Air Dolomiti brands will give us a clearer and more streamlined presence in the Italian market. When we launched Lufthansa Italia three years ago, we filled a gap that had emerged in Milan following Alitalia’s withdrawal from Malpensa and the end of our cooperation with Air One. Our service is highly appreciated and the response from passengers in Italy is excellent. However, given the slump in prices on European routes and the competition, it was extremely difficult to establish a profitable European network under a separate brand. It therefore makes sense to focus the Lufthansa Group’s offering on connecting the connecting the Italian market to the Group’s hubs.

Lufthansa Executive Board member Carsten Spohr, who is responsible for Lufthansa’s passenger business, commented: “We are the most successful foreign airline in Italy and we want to consolidate our position. By shifting capacities from Lufthansa Italia to our core brand Lufthansa and strengthening Air Dolomiti, we will be able to offer our customers an even higher quality network of services via our hubs. The link between ‘Lufthansa’ and ‘Italia’ will remain as close as it has been up to now.” Michael Kraus, CEO and President of Air Dolomiti will be responsible for realigning Lufthansa’s and Air Dolomiti’s presence in the North Italian market.

Thomas Eggert took over as Sales Director in Milan on 15 April 2011. An experienced airline manager, he began his career at Lufthansa more than 20 years ago in Milan, at that time in Lufthansa’s Cargo division. Since then, he has held various positions within the Lufthansa Group in Asia and Europe. Prior to taking up his current appointment he was Head of Corporate Development at Lufthansa Cargo in Frankfurt.

Air India is back!

Visita in piazzale a Malpensa