Emirates Airline turns 30: Just as it has changed the world, now Emirates faces its own changes

The most surprising part about the 30th anniversary of Emirates Airline on 25-Oct-2015 is that the carrier is, in fact, 30. There are those who might think Emirates is older: after all, it is now the world’s largest international airline. Surely such an achievement must be grounded in history, back in the days of flying boats, the League of Nations and colonial empires.

But many would be surprised Emirates is as old as it is. It is portrayed as the fighting upstart, an airline different from the legacy pack, and an operation where growth is still plentiful. Emirates’ youth means it is full service without legacy baggage, becoming a grave threat to the establishment. Competitors are starstruck; Air France-KLM CEO Alexandre de Juniac said in 2013 he flew Emirates and took 15 pages of notes.

That is a fitting anecdote to describe the inflexion point surrounding Emirates’ 30th anniversary. While competitors look at what Emirates has done, Emirates is looking towards the future. As with humans celebrating their 30th birthday, Emirates sees itself entering adulthood. It is time to implement those practices previously written off for another day, fine-tune goals and get in shape for the future.
Emirates has begun to take on legacy attributes; the tyranny of size threatens to compromise efficiency and agility. The next decade requires Emirates to show flexibility. Already Emirates has said it will break its 777/A380 model with medium-sized widebodies. Partnerships and closer collaboration with sister LCC flydubai may be necessary. Eventually Emirates must command greater yields for its brand and reputation. There will be a leadership change as Sir Tim Clark retires, and the challenge of shifting the operation to a new airport, which will unlock more growth.

Competitors channel their energy into worrying about the Emirates of today, but the future Emirates – should it bed-down agility – promises scale and power that is near unimaginable. Hello tomorrow, indeed.

Emirates’ origins are in expediency and crisis, rather than any deliberate attempt to re-shape aviation history. In 1984, Gulf Air – then owned by a collection of states – refused to increase flights to and from Dubai. The ruler of the emirate, Sheikh Mohammed bin Rashid al-Maktoum, decided that the future of aviation in his city state was too important to leave in the hands of others.

Air travel was seen as the key pillar to the city’s development. In the mid 1980s, petrochemicals had accounted for 50% of the tiny emirate’s GDP, but it lacked the large reserves of many of its neighbours in the UAE and elsewhere in the Gulf. With the oil certain to run out eventually, Sheik al-Maktoum sought to ensure a future for Dubai by developing it into a global hub for trade, travel and tourism.

To do this, Dubai needed its own airline. With a modest state investment of USD10 million and two leased aircraft, Emirates was born. The carrier was entrusted to a group of Gulf and British aviation veterans, led by the remarkable Sir Maurice Flanagan and more than ably followed by Tim, now Sir Tim, Clark. Emirates Airline launched on 25-Oct-1985 with a single route to Karachi.

When Emirates operated that first flight, Dubai International Airport had just 3 million passengers annually, almost all of it origin and destination traffic. By 2000, passenger numbers at Dubai had grown to 12.3 million, with better than 1.2 million transit passengers shuttling via the rapidly growing hub. In 2014 there were over 70 million passengers, half of them in transit and two-thirds flying Emirates. 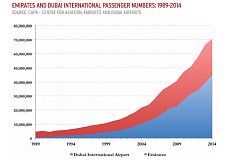